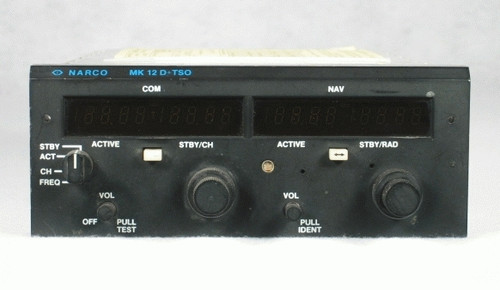 The Narco MK-12D+ NAV/COMM with Glideslope is an upgraded version of the MK-12D with Glideslope, with some extra convenience features such as 760 COMM channels, frequency memories, and VOR radial display. It is also a direct slide-in replacement for the MK-12D (of the same voltage).

The MK-12D+ has a bright gas-discharge display, with automatic dimming. This display shows simultaneous active and standby frequencies for both the NAV and COMM sides. The MK-12D+ NAV/COMM with Glideslope tunes in 200 NAV channels and 720 COMM channels.

This version also includes an internal 40 channel Glideslope Receiver, which will drive a Glideslope Indicator.

The Glideslope version of the MK-12D+ is designed to be used with the following Indicator: