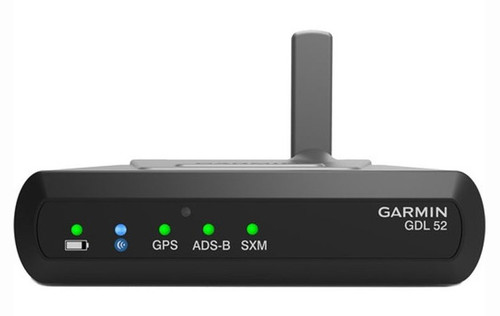 The Garmin GDL-52, like the GDL-50, is a portable ADS-B "In" Receiver.  However, the GDL-52 has some significant extra features:

In terms of ADS-B, the GDL-52's primary feature is to collect TIS-B Traffic and subscription-free FIS-B weather from the ADS-B system. This information is then streamed wirelessly to a Garmin Pilot, FltPlan Go, or ForeFlight app running on a portable display.   This portable display is likely larger, sharper, and easier to read than any display installed in your panel.  This "In" information may also be send to compatible Garmin portable GPS Receivers/Displays.

The Traffic information is called Traffic Information Services – Broadcast (TIS-B), and it shows you the traffic ATC sees. This is a combination of all available position information, including radar and ADS-B. The GDL-52 has a dual-band ADS-B "In" Receiver, which means it can receive traffic sent on either the 978 UAT or 1090ES frequencies. It also generates audio alerts which direct your attention to see and avoid potential traffic conflicts.

The GDL-52 contains a rechargeable battery which permits up to 5 hours of operation.  (This is a bit less than the GDL-50, but makes sense due to the extra SiriusXM Receiver.)  The GDL-52 may also be wired to ship's power for continuous operation.

Lastly, the GDL-52 is able to use its WAAS GPS and attitude sensors to provide GPS position, speed, and altitude information or to serve as a backup attitude reference for Garmin SVX displays.

As a portable ADS-B "In" Receiver, the GDL-52 offers tremendous value for the information and entertainment it provides, and does not require installation.