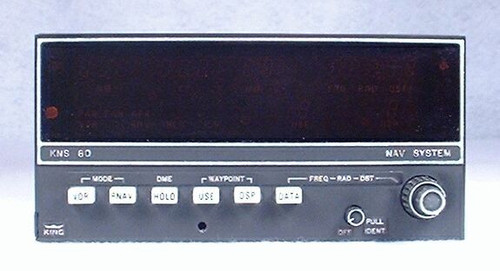 We have historically been big fans of the KNS-80, due to the capabilities it offers and the value it represents.  However, our enthusiasm for this radio has cooled considerably due to declining reliability.

This is a complex radio to repair, with a lot of circuitry in a confined volume.  Between the age, complexity, and accumulated heat damage, we no longer recommend the KNS-80 for new installations.  The best application for a KNS-80 is the replacement of an installed KNS-80 which has failed.

King's KNS-80 is a very sophisticated Integrated Navigation System. In one chassis, it contains a 200 channel NAV Receiver, a 200 channel digital DME, a digital RNAV computer, and a 40 channel Glideslope Receiver. Before the advent of GPS, this was about as much capability as you could get in one General Aviation radio.

The RNAV computer allows the pilot to electronically "move" a VOR, allowing more direct flight. The computer also helps with flight planning by providing the preselection and storage of 4 frequencies and/or RNAV waypoints.

The only drawback to the KNS-80 is that it is quite a bit taller than the usual flat-pack radios. This unit is about 3 inches tall. But if you have the space in your radio stack, you can add a lot of capability with a KNS-80.

Since the King KNS-80 contains an internal VOR/LOC Converter, it is designed to be used with indicators that do not include this converter, such as:

You may also be interested in an Indicator to use with this KNS-80.