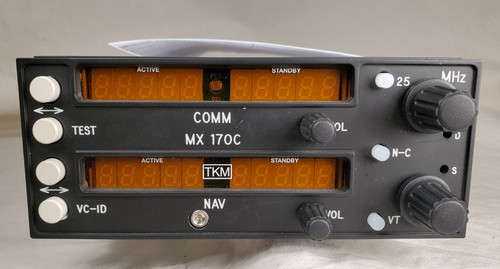 We are frequently asked about the difference between the MX-170B and MX-170C.  We were curious about this too, so we asked the factory.  TKM explained that they made a component change to the MX-170B in the middle of the production run.  They considered it a minor change, and had planned to continue calling the radio an "MX-170B".  However, the European Union ruled that this change required them to change the radio's name.  From that time forward, these radios have been called the "MX-170C".

We have not noticed any performance or reliability differences between the MX-170B and MX-170C.  However, we can conclusively say that any MX-170C has been produced more recently than an MX-170B.

The MX-170C is the TKM radio designed as a slide-in replacement for the King KX-170B and KX-175B NAV/COMMs. There is more to the MX-170C than just painless installation. It features:

These are the most common indicators used in MX-170C installations (the same as with a KX-170B installation):