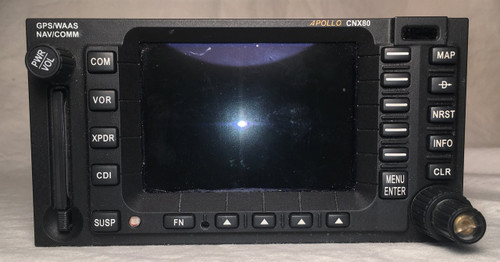 The II Morrow Apollo CNX-80 (later rebranded the Garmin GNS-480) was the first integrated General Aviation GPS Navigator with WAAS capability. This radio was far ahead of its time. In fact, we believe that it was the technology in this radio, and the people who created it, which prompted Garmin to purchase UPS Aviation Technologies (UPSAT).

Instead of simply allowing waypoint-by-waypoint navigation, the CNX-80 / GNS-480 is a Flight Management System (FMS). The primary advantage is the ability to selects Victor airways as a whole, rather than enter each of the waypoints which define the airway.  This greatly simplifies the creation of flight plans.  Perhaps more importantly, this makes it faster and easier to change the flight plan on the fly when given changes by ATC.

Please note that the CNX-80 / GNS-480 offers 760 COMM channels, so this radio is not the solution to meeting a 8.33 kHz channel spacing requirement.

The two best features of the CNX-80 / GNS-480 are the opening of thousands of runways to precision WAAS GPS approaches, and the ability to provide a WAAS position fix for an ADS-B solution.

WAAS Approach Capability - WAAS, or Wide Area Augmentation System, is a fundamental improvement to GPS accuracy. By adding a series of ground stations and geostationary satellites, WAAS GPS is typically 5 times more accurate than "regular" GPS. This means that it is now possible to fly a complete "Virtual Glideslope" approach into an airport with no local ground-based navigation aids whatsoever. An Apollo CNX-80 (Garmin GNS-480) makes the following approaches available:

There are thousands of FAA-approved LPV WAAS approaches, with more being added regularly. The FAA's stated goal is to have a WAAS approach available for every public runway at least 3,200 feet long. To see if the airports you use offer WAAS capability, please click here for the FAA's information about GPS/WAAS Approaches.

The Apollo CNX-80 / Garmin GNS-480 may be used with any of these Indicators (the Garmin units are the official choices):